– one-to-one correspondence between the numbers and characteristics being measured

– the rules for assigning numbers should be standardized and applied uniformly

– rules must not change over objects or time 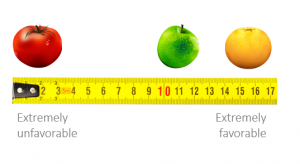 Scaling – involves creating a continuum upon which measured objects are located.

– nature of the research

– variability in the population